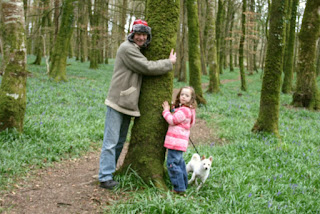 If I offer an opportunity for arousing inspiration and creativity in the woods,
Bards In The Woods, or
simply a Walk In The Woods,
the reaction is "nah, don't have the time, don't see the point" ...

... but give it an Oriental name and it becomes magical, special, and something I could probably charge thousands of euros to teach :-) .

"Shinrin Yoku" is fast becoming fashionable around the USA and is creeping around Europe now.  Shinrin Yoku means "forest bathing". It simply refers to spending time in the woods for therapy as a kind of "spa", a "bathing".

Among trees in a woodland or forest I notice those with us on Bards In The Woods feel tension slip away, and this is when inspiration flows and beautiful words have been written, often by people who have never written a poem, song, or meaningful story ... or may not have done so since being a child.

For those of us who rely on science for truth, there are reports now out confirming how being in the woods has a healing influence on the body.

Scientists are now telling us that when we spend a few hours on a woodland hike, especially if the woodland is by a river or lake, we breathe in phytoncides.

Phytoncides are active airborne substances that holistic therapists call essential oils, or antimicrobial volatile compounds, that are released by plants to protect them against insects and from rotting. These phytoncides appear to lower our blood pressure, reduce stress and boost our immune system.

So I suggest memorizing that word "phytoncides" as it is about to become THE buzz word soon in holistic, wholefood, and therapy circles. Its going to be a vital word in social gatherings and you will be the light of the party if you know and can explain what it means. Add the words "Shinrin Yoku" and you will open up your new consultancy business on the spot!

The reason this adopted a Japanese name was due to a Japanese research, that was simultaneously conducted somewhere in the USA, once they got wind of this.

The term “Shinrin Yoku” and its concept were introduced in Japan by the Forest Agency of the Japanese government in 1982, after the Japanese Ministry of Health, Labour and Welfare discovered that the majority of the Japanese population over 12 years old suffered serious stress.

There was a demand for scientific evidence to support the health benefits of spending time in the woodlands. In 2005 the Japanese Forest Agency introduced the “Therapeutic Effects of Forests Plan,” to open up scientific investigation.

Being science, the scientists found it difficult to control the experimental conditions in the woodlands, that they call "field", than they could in the laboratory. Taking measurements among the unknown and unexpected variables such as temperature, wind, light, and noise, must have driven them nuts ... to the point of them needing a good bit of Shinrin Yoku themselves.

Somehow they got results, though, which is now, and will be, the backbone qualification of every Shinrin Yoku consultant,
which we otherwise call a "Bard In The Wood".

One discovery by a Japanese science team was that blood-sugar levels of diabetic patients dropped to healthier levels when they walk through the forest, but unfortunately I do not have a link to their report.

Shinrin Yoku has not been the first "brand" for woodland health benefits.
There is the "Kneipp Therapy" formulated in Germany in the 19th century,
which is really about taking brisk walks in the woods, recently revived as
the "Green Prescription" by some doctors.

Of course, Shinrin Yoku is said to be much more than just a brisk walk in the woods.
It includes a lot of serenity too.

I am sure that future Shinrin Yoku consultants, practitioners, or whatever they will call themselves, will make this quite sophisticated and complex.

I am sure they will claim that enjoying the benefits of “Shinrin Yoku” depends on their guidance and tailor made programs based on an individual's age, physical strength, shape, and personal interests. These consultants will probably ask for or test for blood pressure, pulse rates, and even biomarkers from saliva to analyse such things as cortisol and immunoglobulin A, that can identify levels of stress.

As you may already gather, none of these things are needed to be known before you can get to the woods and enjoy the benefits ...

... which we Bards In The Woods have discovered are greatly enhanced through being with others and enjoying a shared picnic together.

I'm sure there will be someone, though, who will say
"my Shinrin Yoku consultant says my stress levels are low,
so I don't need to go to the woods this week".

Of course, there is a layman's reading book out about this,
for those who find that a book is essential before trying out a woodland walk ...


Joan's book does go into a lot more woodland wisdom, and is very interesting.

Joan mentions, in her book, that researchers studying the forest air of Sierra Nevada of California found 120 chemical compounds, but could only identify 70 of them,
so if these forests were lost we would never know what we are losing

Her book, “Teaching the Trees” goes into some of the known compounds,
found in the woodland air, that come from the trees and some from the
forest fungi and bacteria in the soil. Most of these airborn compounds
are from little pockets between the leaf cells.

Joan also asks if the 50 unidentified compounds are
what "make us feel better" in the woods.

If you love books you should find Joan Maloof’s writing style is very easy and enjoyable. Not being much of a book reader myself I love how she explains how each tree is more than just a tree but each one is a mini-universe of organisms interdependent upon each other in amazing ways.

Through reading this book you will find yourself learning about trees, birds, insects and fungi without any intent to do this. Her book is really about the workings of nature, where the trees are the core of this, the place where worlds meet.

And, No, I do not think browsing photo albums of fantasy tree pics online via Facebook, Pinterest, Flickr and YouTube, with woodland essential oils burning in the background, is Shinrin Yoku, despite being seemingly relaxing, as all senses are not responding to being within nature.

As a closing thought, I'm personally not happy with "phytoncides"
becoming a buzz word, its too science fiction.
I think something like "faetoms" - scent of the faeries is better,
or we could go Irish Gaelic and say "boladh na sióga" - pronounced bowa na shiga.

If you would like to peruse the long and very dry research report
from the USA, click here