December 26, 2012
Question asked?
What are the "pagan" origins of the "wren" sacrifice,
it has to be better than the Christian version? 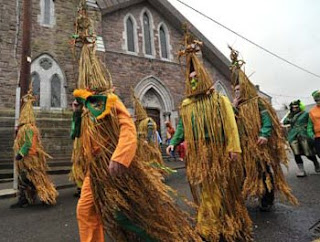 To me the ancient story seems very simple and quite beautiful. Its another perception of our relationship of winter to summer.

In ancient times it looks like Ivy often took the blame as the bringer of frost, ice, snow and all that makes us cold.

Ivy is also, commonly, where the Wren lives as shelter from winter. To many, it was the Wren, not the Ivy, that was blamed as being the caller on of winter.

Holly, though, is where the Robin hides, well not actually hide as he makes himself visible on and around the Holly. Why He, why am I being gender specific? Because She Robin is off in warmer climates having her annual holiday romance with another robin.

The Robin is, therefore, regarded as the caller on of the warmer weather, especially after the sun has turned and the days will now be longer.

This is why christmas and yule cards feature Robins with Holly, to bring on the light and warmth, and lift our melancholy.

The Battle of Summer vs Winter

In parts of England, especially Herefordshire, and later fertile parts of Wales, some grain, apple and hops farmers used to do folk dramas by binging sheafs of grain, from their last harvest.

There would be two main players, and the play performed just like most mummers and guising plays. One of the players would add Ivy to the worn grain straw costume and be called "Ivy Girl" and the other would add Holly to become the "Holly Boy".

They would go into combat, Holly defeating Ivy, but Ivy being raised by medicine or by a shaman type of person and the two would be joined in peace, forgivness and equality to remind us of balance.

This combat is said to have started to be performed as a rite of winter vs summer, much like the dance of cold feminine Yin against warm male Yang.

Or, was it Goddess vs God

Later this performance is said to have become a battle of reverence to Goddess vs God, with the farmers being on the side of Ivy the Goddess.

They believed the Ivy goddess was the bringer of their harvest and not Holly the god who's trickery to believe it was getting warmer, was shown up by the arrival of unexpected weather, reducing or ruining a harvest - very controversial stuff !!!

A Question of Trust?

So, Ivy and the Wren were not evil to all but to some were held in high esteem among several ancient tribes. For them leaves formed the crown of the bard that he would wear as he spoke.

With these people, Holly the Robin became the image of the Druids and later the Priest who they gre to mistrust.

Somehow Ireland took part of this myth and turned it into the St. Stephen Story, based on this mistrust, but it was again the Wren, the caller of Winter that became the villian, though again in some places the Wren was also still The King to trust.

For me, its a reminder of cycles, tolerance, forgiveness, balance, and dance of the ebbs and flows of male and female, warming and cooling ...
peace, acceptance, gratitude, and trust in the flow and regeneration of life.