At Last, At Ravensdale Forest 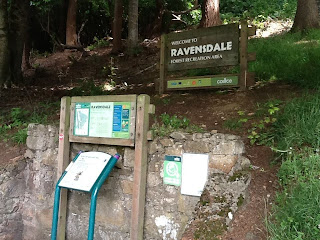 Time In The Forest

Lisa Watters of Dundalk is one of the most motivated Walks In The Woods supporters I know of in Ireland, and we had not met yet. Whenever she puts out a date to Walk In The Woods several people turn up, no matter what the weather throws.

This was Saturday 6th July and the focus this time was more on Picnic than Walking, in Ravensdale Woods

I was heading to Devil's Glen in Co. Wicklow on the Sunday so I thought seeing as I was in the east, and have a rail pass, why not join the Louth people?

I met Lisa at the Dundalk Bus Station and we were the only ones using the Dundalk to Newry bus that goes quite close to the forest entrance.

On arrival we immediate met up with  Trudy Hoey-Murray who had arrived early. The three of us waited at the car park until 1:30 pm, meet up was 1 pm today ... but nobody else arrived so we took to the forest.

Quite an uphill climb, but well worth it for what was to be ahead of us. 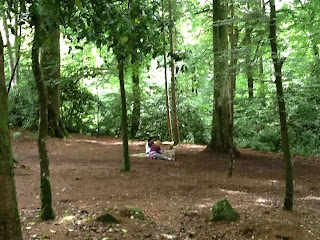 Being listed as a Picnic Event the three of us settled into a bubbling burn waterside spot shaded by larches, beeches, firs and an oak or two.

After interesting discussions and debates we decided to head off on a short walk, leaving our picnic wares hidden, as it seemed barely any other people were in the forest that day. 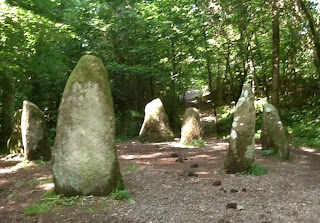 We visited the stone circle, and there is some debate whether it is genuine, a folly, or a folly built on a site of an old circle. Old maps from 19th century show two circles here, 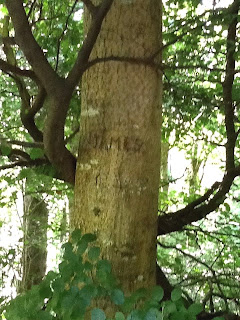 On the way to the circle I was awed by a gigantic tall Rowan tree that was being hugged by the branches of a young Elm tree. I had to recite my Luis The Rowan poem here, though it was not recorded 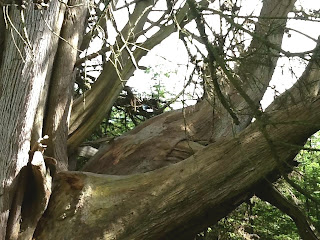 Next up was what Lisa called 'The Elephant Tree", as it took on the shape of one ... 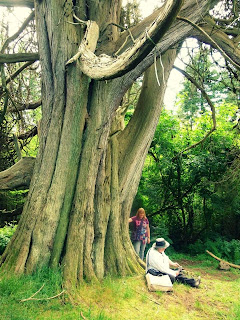 and it certainly has has a huge trunk too. From the look of its small round cones, this is an imported Coast Redwood from California. 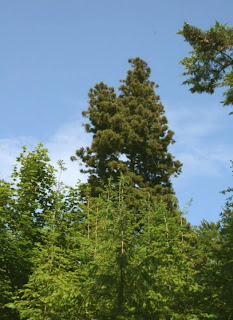 I was also intrigued by a proud tall Silver Fir nearby, and wondered if it was actually a White Fir from the same area as the Coast Redwood

Fun Of The Picnic

Returning to our picnic area to nibble and party some more, we met some other people in the forest who told us about a big gathering of people picnicing, partying and barbecueing at the picnic tables by the car park.

We gathered our goodies, took the track down the hill, and there were about 20 other people who had come along to Picnic, in response to Lisa's posting ... so we joined in. Lisa knew almost everyone, anyway. 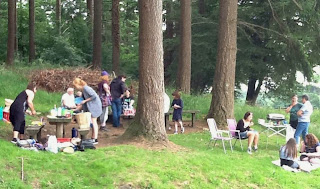 Apparently they started arriving just after 1:30 pm, just after we started climbing the hill, though most admitted their arrival times were 2 pm and 3 pm.

Surprisingly no musicians and poets, but I shared one of my own poems. Overall, there was lively debate and lively passion about this forest, and the forests of Co. Louth. From the passion and commitment shared here its not surprising that Co. Louth Walks In The Woods are among the best supported and the most frequent in Ireland.

The people here ranged from young families to seniors, all with an incredible devotion and unity. All of the children present seem to be delighted to be here. There was no moaning and complaining and desire to be somewhere else. The children made their time here the best it could be.

People coming together here is, I am sure, a credit to the passion, enthusiasm and "lets do it" attitude of Lisa Watters that is very infectious.

The picnic sort of broke up about 6 pm after a very lovely social time together. 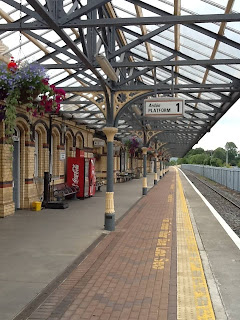 Reflections At The
Railway Station

At the railway station it was another hour before the train to Dublin was due. Dundalk is a very pretty classical gothical and well kept station that I am sure must have been used in movies.

I explored here, checked out their small interesting museum and found the old timetable of long closed railways lines from Dundalk fascinating. One that stirred my imagination was of the Bundoran Express that started from Dundalk, and stopped at Clones, Lisnaskea, Enniskellen, Belleek and onto Bundoran

I explored more of this transporting back in time .. 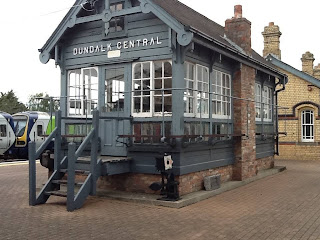 The signal box still present and preserved on the platform fascinated me too. 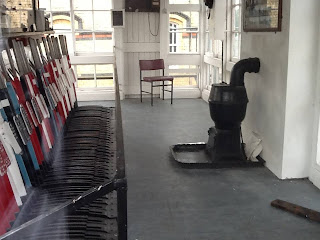 The train arrived and my journey back to Dublin was more relaxed. Coming here every seat was full, but the return journey gifted me with some quiet privacy to reflect on the afternoon.

The train was the Belfast to Dublin service, called The Enterprise. Its quite stately and operates much like the old British Rail did. I am used to Irish rail services that are like buses, that stop at the platform for a few seconds, and if you are not aboard, then tough luck.

With The Enterprise every train station stop was an event, at least 10 minutes if people were getting on and off or not. The train did not move again until after quite a ritual of whistle blowing, flag waving and locomotive tooting.

The stations all looked fancy like something from Miss Marple stories and each one has a Station Master dressed with fitting striped waistcoat and hat.

The train itself had a buffet car, restaurant car and even a good old fashioned guards van with a guard for bicycles, granny's trunk, coffins, and anything else that needed transport.

All OT, from the initial walking afternoon but the train ride to me blessed the same honour, passion and pride that seemed to be present when we were at the picnic. 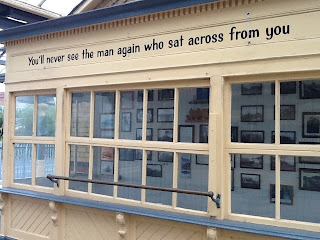