For a stranger to Manorhamilton this is perhaps not the easiest place to find. I was hoping people were using these woods as again my journey here was dodging lots of people with children wobbling on the road with bicycles, pushing strollers of babies in the middle of the road, and dogs on leashes wrapped around ankles.

This time these folks were playing with more danger as it was raining, visibility for drivers was poor and roads quite slippery. Why these people do not use the wonderful off road tracks, especially in beautiful woodlands totally baffles me.

Pearl Neptune turned up within a few minutes. I have never met her before, a very motivated enthusiastic woman who later treated us to an amazing vegan picnic spread.

She brought her two delightful daughters, and I embarrassingly forget their names. Adventurous and enthusiastic as their mother, and often calling me "slowcoach" but I was in the mood to savour this place today so my movements were slow.

A couple of minutes later someone else I had not met turned up, Mark, He knew me and recognised me from a forestry sell off protest outside the Dail this year. 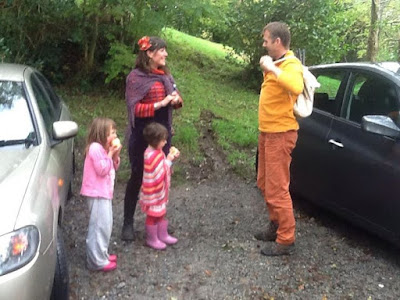 Mark is a man with a strong interest, passion and knowledge of nature's living, especially fungi. He explained to me about his land that includes a 20 acre forest at Glencar with a waterfall reaching higher than the famous Glencar Waterfall. He said that public access to this other waterfall, including woodland hike, is being completed through this winter.

(we have since visited when this path was created and it is magnificent!)

So off we stride.

This is a beautiful small native trees forest with lots of oaks, hazels, rowans and holly trees beside a beautiful gushing river that was full of action after the morning rain. 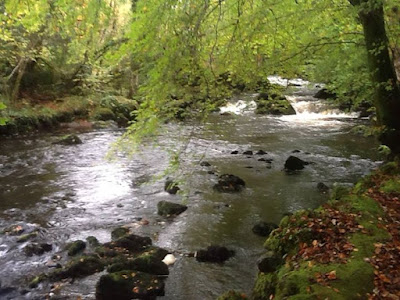 The rain had stopped, the sky clearing into being blue quickly, sun coming out, and it was becoming warm quickly.

We crossed the bridge here to continue the adventure. 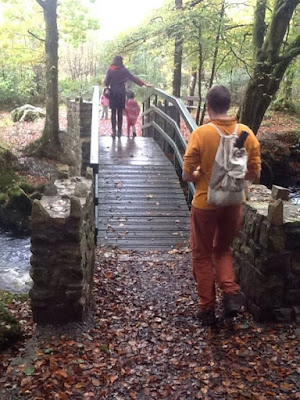 Now the sun was out several local people seemed to be making their way into these woods for a walk which was heartening. If I lived in Manorhamilton I am sure I would be in these woods at least twice a week.

As I mentioned, there are several oak trees here, middle aged, maybe 20 to 40 years old, and some young trees 5 to 10 years old. Several of them had leaves with these beautifully coloured gall larvae left by the Gall Wasps, or Gall Flies. 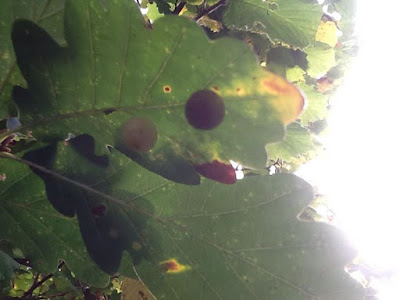 Biologists as still not clear about how these galls form, feed and expand. 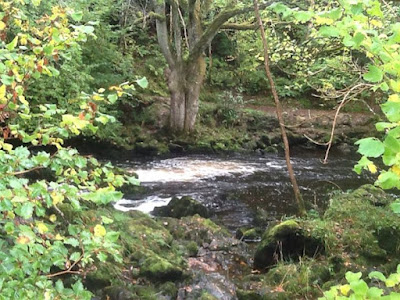 One of the girls picks up a fallen small oak branch with both the wasp galls and acorns on it. 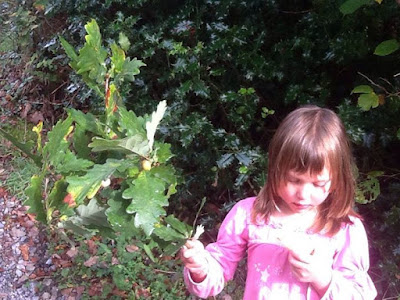 And the river scenes carry on being beautiful and enchanting ... 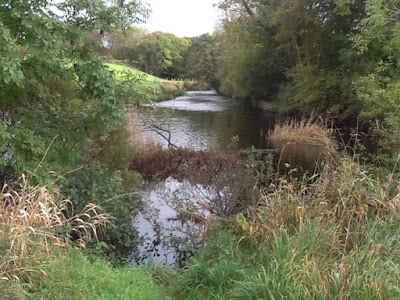 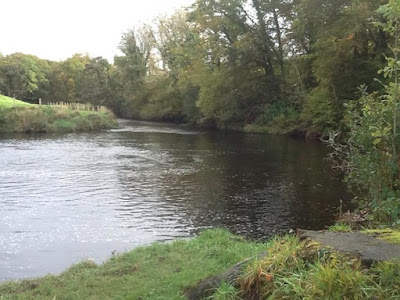 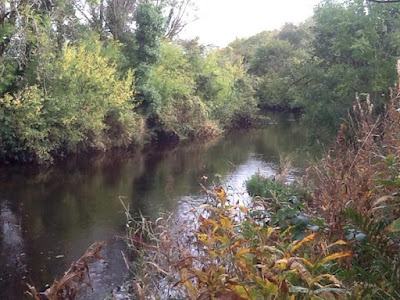 ... especially as the trees and shrubs of the banks are starting their colour changes.

Some of the oak trees are very tall here, but have short branches. We discussed and wondered if they had growth suppressed by other close trees that have since been felled. 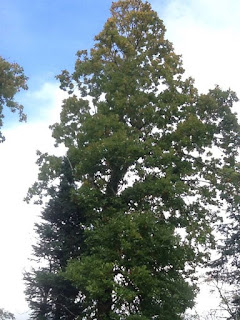 I was also amazed how they were holding onto the green in their leaves as all of the oak trees at my home have turned their leaves into beautiful yellows and reds.

Lots of Rowan trees here too with a lot of their berries still hanging and not taken by birds.
Notice the five pointed star under each berry :-) 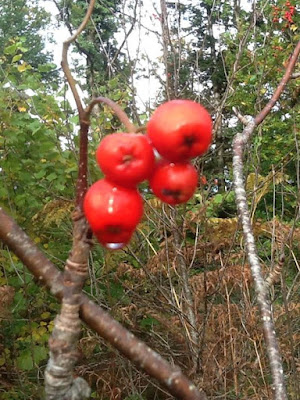 The children loved the water scenes and playing on the rocks by the river. At times it seemed they were impersonating the cover art of Led Zeppelin's 'House Of The Holy' LP art. 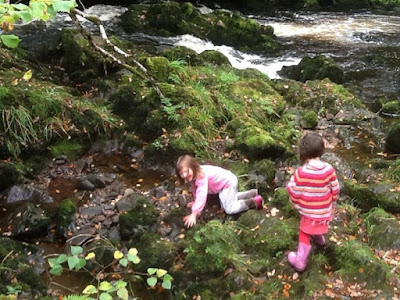 One more river scene before we go off and have a picnic. 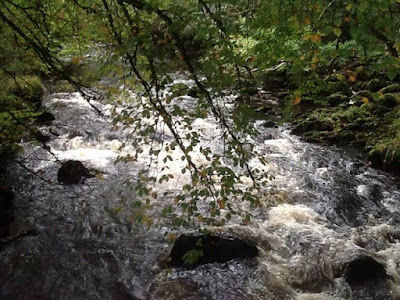 The picnic table spread was incredible !!!

Pearl appeared with all kinds of bowls of salad, a couscous salad, bean salad, green salad, popcorn ... and I added my own vegan potato salad.

All kinds of teas were brought along
And there was a dessert of organic vegan brownie cake too :-)

Oh, and Pearl had brought along big plates, cutlery, cups, a true picnic professional. I usually bring these things along but rarely does anyone else do that. I liked using Pearls plates. They were bigger than mine. 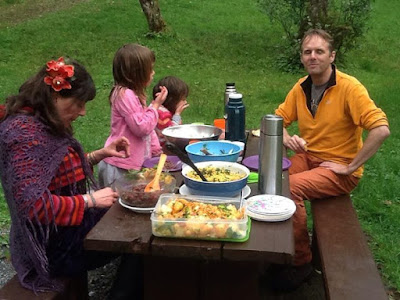 After eating everyone had to leave, and the girls had a party to go to after this too, what a day for them !!!

I could not bare to leave yet, though. The sun was beating down, now over 16C and into the 60sF for late October. Amazing. I just wanted to bask in it all 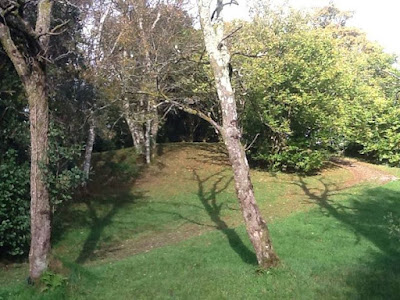 After awhile, there was a little cloud cover and a nippy breeze sneaked in. Time for me to go too, but people were still turning up to enjoy this little local paradise for them.

I found it strange that others did not join us, especially with the finale of Pearl's wonderful picnic.

Maybe be next time we are here, after reading this, folks will join us ... or they may well gather here well before I return here to be Bards In This Wood.

I'm glad I did not enter into the thought of not coming because of rain, as some did as usual. After I drove towards here I did hit a torrential shower that lasted for about 30 mins of my journey ... but the gift of keeping going was one of the best Sunday in the Woods experiences I have had this year.

Do join us here next time at Milltown Woods, if not before.