Glen Of The Downs Forest Park

I've been curious about Glen Of The Downs Forest Park for several years, and especially since the June 9th Walk In The Woods Day, as this forest park had the best turnout for the day.

I was seeking to replace my ripped up wax coat and falling apart wide brimmed wax hat. After a disappointing day checking out Dublin shops where wax coats were between € 300 and € 500 and hats towards € 100, I was going to leave the idea to ordering online.

Claire suggested we tried Fishers in Newtown Mountkennedy in Co. Wicklow. I had been there before and prices were outrageous there then ... but Claire said they serve a good lunch. I thought we may go for a walk at Devils Glen or Church Glen woods after, as it was a lovely unusually mild 1st December day.

I was not in the mood for traditional dinner Sunday lunch, cheese scone with local cheeses, home made pickle, superfood salad, mince pie, and the best coffee I had had for a long time, and I am not a coffee drinker often ... and Claire had the same.

Fishers were having an an "official" (I'm always amused when people use that word) launch, so it was a very busy place. Interestingly, there were some Bards In The Woods people from various gatherings I have been in during the year ... and they were planning woodland jaunts after their lunches too.

First, I reluctantly went into the men's clothing area and started looking at the predictable €400 and up. A lovely woman approaches me and offers to help as I seem to be having a problem. I said "yes, I am, my budget cannot buy anything here" ... so she took me to a corner rack, and there were the clear-out items, and I got my new wax coat and hat for less than the cost of a soup, sandwich and tea for four people. Success !!!

So in sheer delight, off to Glen Of Downs Forest Park ...

A lot of people thinking the same. There seems to be much more support for the forests during this unusually mild and dry November, and now December, than through any part of this year.

First thing to notice is lots of oaks scattered around.

This is not a Coillte forest but a Wildlife and Heritage managed one, so there is not a detailed walking map for here, well not one I contacted. I did find a blog with a rough map of the trails so had a sense of what we could do and find here.

So the above pic is the start of a trail here, a thick blanket of bronze and gold leaves.

I regret not taking a pic of the pleasant little stream below, which I later learned is the 'Three Trout Stream" which was once a torrent river that cut out the gorge, the canyon, that is now Glen Of The Downs.

The path seems to forever climb ...

This is quite a blessing because through the first section of this trail the noise of the traffic on the busy N11 is quite numbing and takes away a lot of the potential Shinrin Yoku, Forest Bathing benefits.

As we climbed the noise was less and eventually the climbin path turns inward anti-clockwise to eventually totally shelter us from all road sound.

There were also several people raiding them for their indoor Yule celebrations, or to sell them on maybe. I wish they would leave them alone !!!

There was, alas, a quick escape for these people along a shorter path into the nearby village.

From her the heritage forest opened up into views of a golf course and onto the Irish Sea towards Wicklow.

From here the path went into a tree plantation, Douglas Fir, I think, but soon entered into broadleaved forest again and bronze leaved pathway among the beeches and sycamore, plus archways to indicate we are in an old estate area.

Some early Gorse out here too, which is quite typical for Co. Wicklow, it seems.

At the highest point of this trail, quite a climb really, we are at some remains of Bellevue Estate House.

Below this, some young boys entered, excited that it may be a dungeon

Claire went in to investigate too, and came out at another place. Note she is carrying her coat as its getting warm this early December day :-)

From here the forest path narrows and its a steep descent 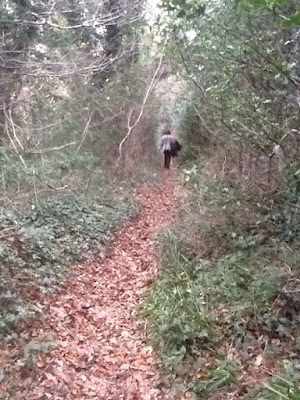 Though I have not taken pics of people and dogs we met on this outing, there were a lot of them. We also met a lot of people, usually with dogs and children or both, coming towards us in the opposite direction. This caused us to wonder if we had taken the difficult direction.

At this point we questioned why we had not seen or heard wildlife yet as this is listed as a reserve. Not even one bird seen since we have been here. We wondered if it was due to the many dogs around sniffing and following trails that kept the wildlife away.

The bronze turned to gold as the downward path descended more rapidly around the sycamores, the maples.

The road noise was back with us, and within minutes we were back to the forest car park.

Alas, two cars were there with smashed windows. Smash and grab raiders had been and left. Both cars had bags with valuables left in them. A lesson again. We were not affected, old car not been cleaned out awhile and visible junk in the back seat was no temptation to raiders fortunately.

The people of the two violated cars were helping each other, it was just getting darkish, after 4 pm now, but Claire still had some fascination for beach time ... and I did too, so we headed to the Beach Road, east of Newcastle, Co. Wicklow.

Remarkable mild 10C, 50F at night time for 1st December !!! Several people were still strolling the sea shore edge. This looks out towards Wicklow Town lights, and the single light on the beach is a dog wearing a light on its collar :-)

It was actually too warm to wear a coat, so coats off, we wandered in the other direction.

Then returned hunger pangs put us in the mood to return home for a snack or so. Bye, Newcastle

That building was once an old railway station here.

Glen Of Downs forest is a grand walk and easy to get to from anywhere in Dublin and Bray etc. Buses do go quite close to a path entrance from Delgany village.

On another weekend we will try out Coillte's nearby Kindlestown Wood which is a former spruce plantation now transformed into a mixed species broadleaved tree forest.