March 02, 2014
2nd March 2014, launch day of the National Tree Week in Ireland, and I was at Knockranny Woods, near Keadue, Co. Roscommon, one of my favourite places in Ireland.

No matter how often I come here its a habit to leap out of the car and take a pic across to the crannog where it is said a linnet lived that Turlough O'Carolan played his new tunes to. 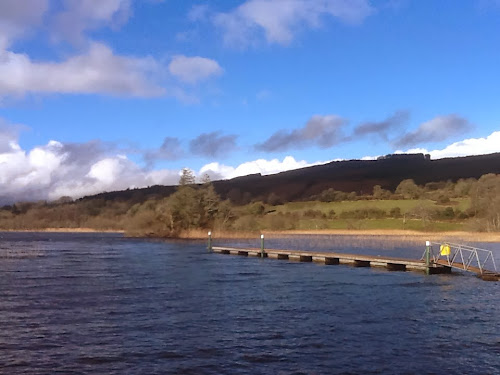 I also always look for the pair of swans here, and there they are ... 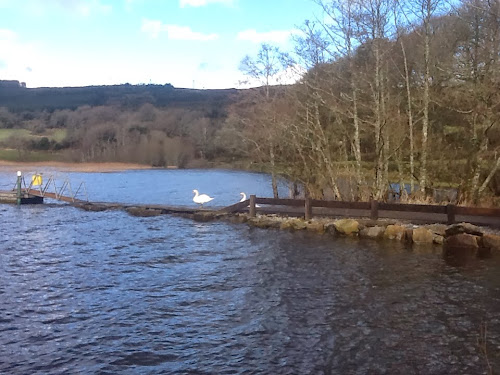 and they come up close to see what is on offer ... without hissing this time. 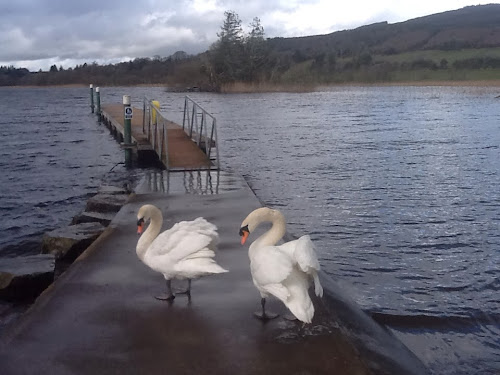 When the people get here, this is where we intend to go ... 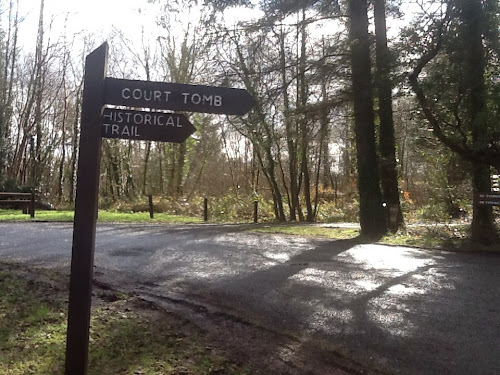 Yes, along this trail, starting here ... 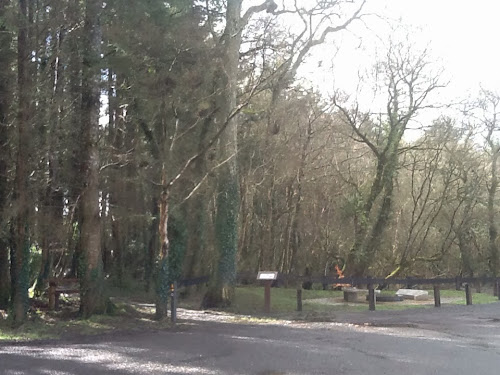 and follows the lough shore awhile ... 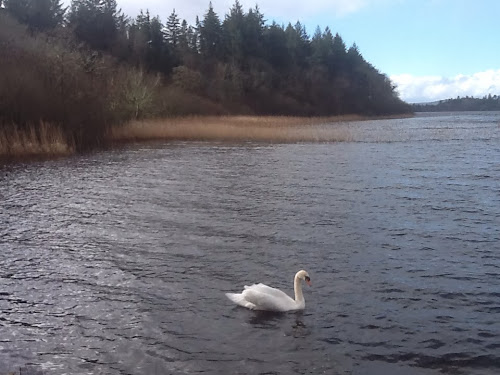 A couple of people turned up, responding to the Tree Council Tree Week listing, but as they were out of the car a light shower happened ... they shrieked "arghhh, too wet !!!", left back into their car and sped away high speed. 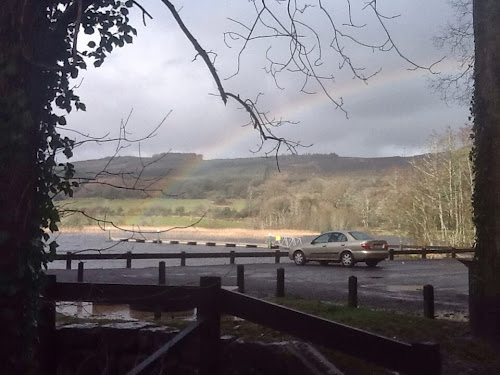 Just then another couple turned up, also responding to the Tree Week listing, totally kitted in new hiking rain jacket, leggings, boots, stick and small rucksack ... have they just come from LIDL?

I did not get a picture of them, wish I had.
Anyway we got going along the trail. 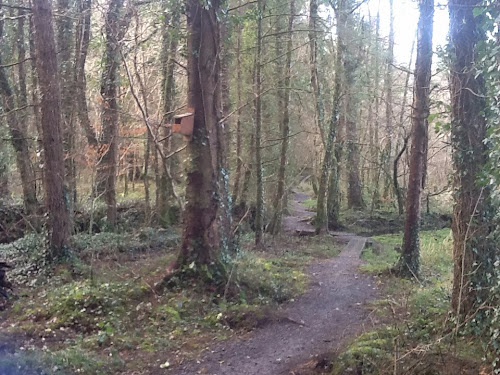 Soon we came across some woodland a bit flooded. 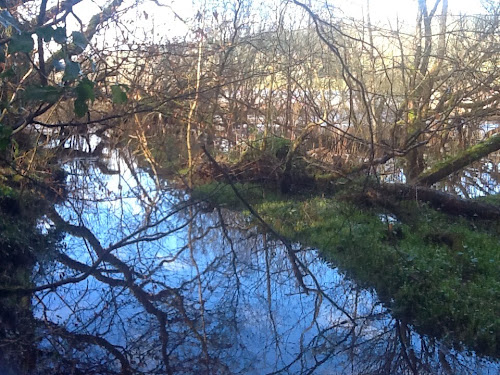 Quite pretty I thought 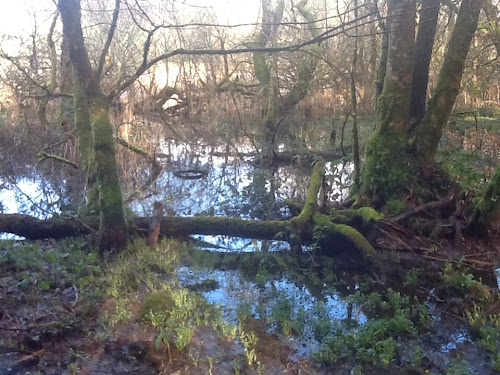 But ... this was too much for the new kit people.

The pathway at this point is raised planks over where it may be flooded or boggy and one of the couple was getting nervous of the new walking boots getting muddy.

So they turned back saying that they were going to do a road walk to Lassier's Well instead.
I carried on ... 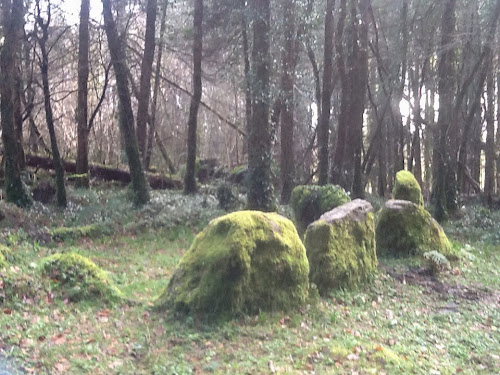 ... to the stone circle and stone passage of the ancient court cairn here.

On the schedule is 3 pm Bards session here. Will anyone turn up? The sun is out and it is warm.

As I wait, I notice t-light candles and other debris around. When I see this at ancient sites, especially in woodlands, I question what these people visiting here are embracing and honouring. One thing for sure is that their time here has nothing to do with connection to 'nature', well not as it is but instead as they want it to be

... including handling their hard to recycle trash. 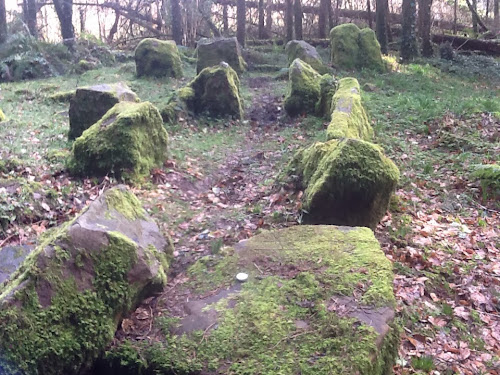 Ah, some people turning up, some chat with me, but they are here for the sun, air, silence, adventure and wonder ... and not for poets and bards :-) 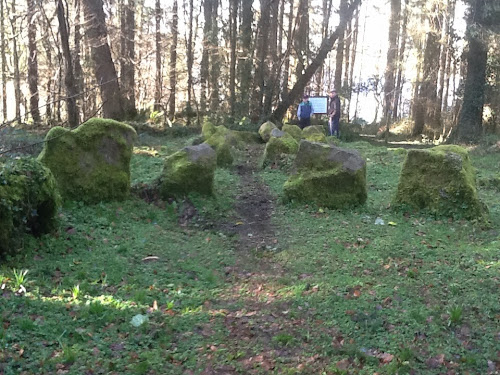 After about 3 pm, no poets or bards here, I wander towards a seat looking out over Lough Meelagh towards the inspiring Orchard Ireland of enchanted tales.

It is by here there is Holly beside a mature Sessile. Several legends are told of this in winter but it is not often seen. Oaks are not often seen by water either as they prefer well draining esker land, but Ireland's sessile oak can take quite a bit of water and be happy.

In summer when oak's leaves are out much of this Holly will be hidden. 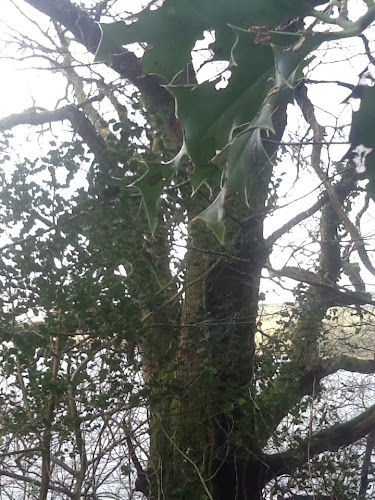 At this point Bards In The Woods regulars Bridget Foy and Andy Beach arrived. After a ponder and chat we slowly took the path back to the car park, but not before passing our favourite vintage Beech Tree.. . 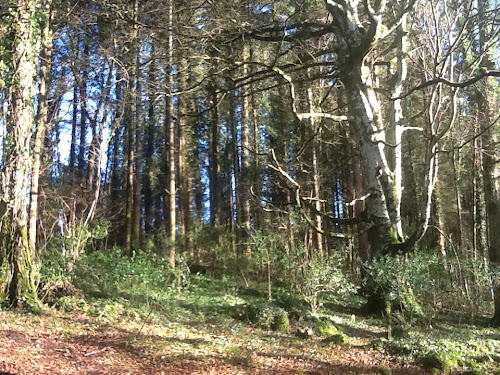 After we returned to the car park and said our farewells, drizzle returned, but very briefly.

Before I move onto what I did next ..
click here for Bridget's blog of today too,
a very different and dilightful expression about here.

Meanwhile, drizzle was very short again so I decided to look at developments at Lasir's (Lassier's) Well through the winter. At our last visit here at mid October we were quite optimistic about developments ..
. 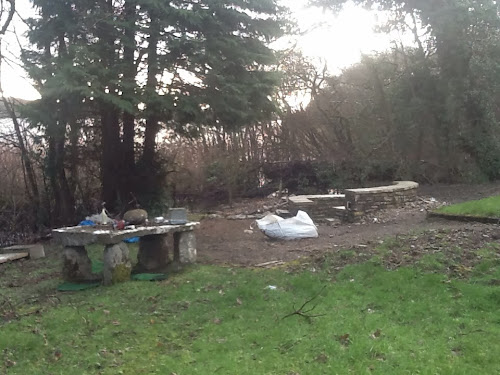 The stone work of the well wall looks very good 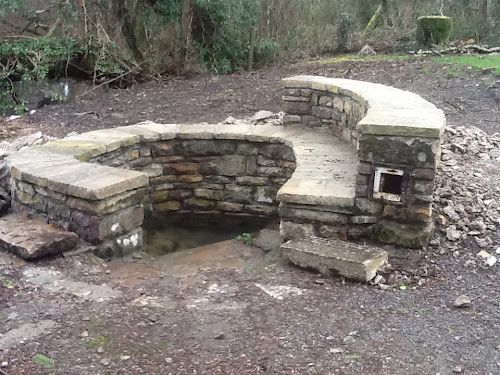 ... but I am not sure about the purpose of the rubble around it ... 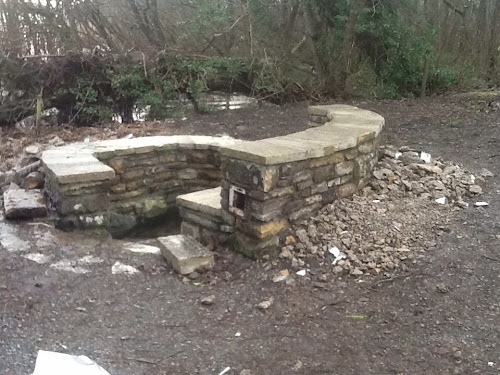 which looks like the pillar that once hosted the 'hail Marys' and other instructions has been crushed along with other items around.

I was also initially disturbed by the reed thatch material blocking the stream and covering the ballaun stone area. 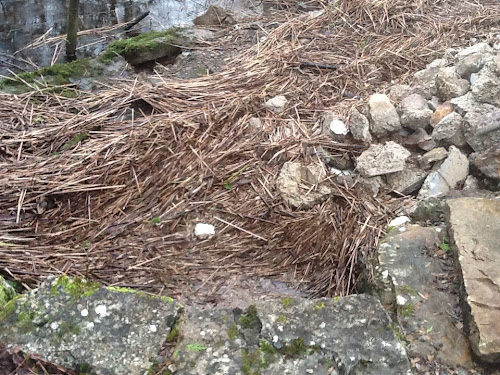 I was wondering if the stone had gone, but after poking around discovered it is still there and is perhaps best covered for now. 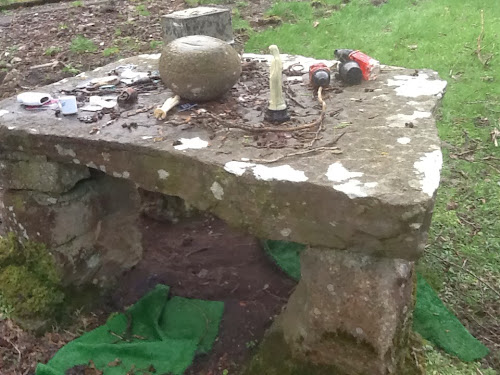 and other relics scattered around ... 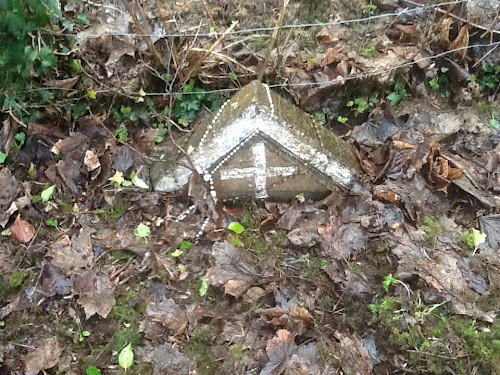 Some young healthy trees cut down and I do not know why? 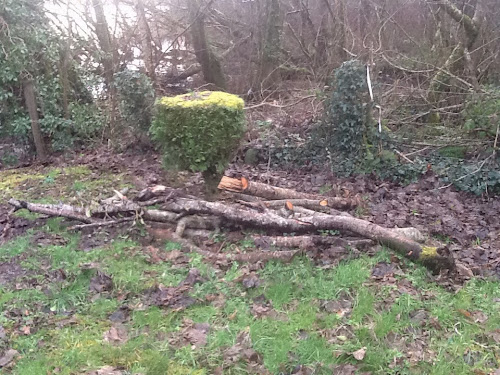 Plus a very strange honouring of a rag tree, sioga tree, whatever you like to call it ... but what prayer or wish is this asking to embrace? 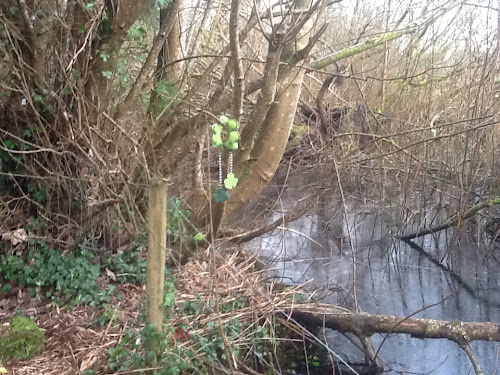 The Pattern Day here is September 8th though the church tends to arrange something for the Sunday closest to this date. So there is a fair bit of time to arrange here until then.

Also in the area the local priest Father Sean has just passed away. Is there something symbolic of that here.

You may ask who St. Lasir, Lassair is? I will revive a blog post on her some time in the future.

There are favourite stories of her and her association with Brighid. Both of their names are connected to fire and flames. Brighid had cattle, Lasir had sheep, and sheepshhearing in May is honoured to her in this area.
My favourite Lasir story is an Imbolc one, the calling of women to her well for Vision ... but I will tell that another time. :-)