Glenwood Is Promising ... but

April 27, 2014
My third Co. Sligo forest visit today was at Glenwood, not to be confused with the beautiful The Glen. 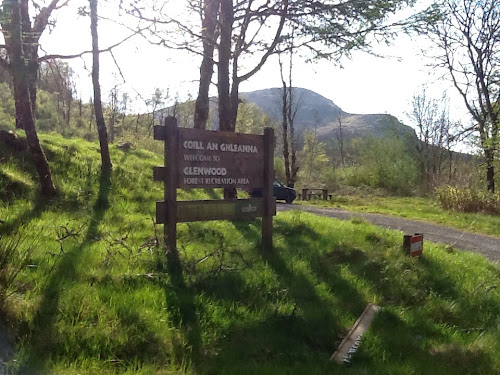 Hmm, this looked promising, lets give it a go 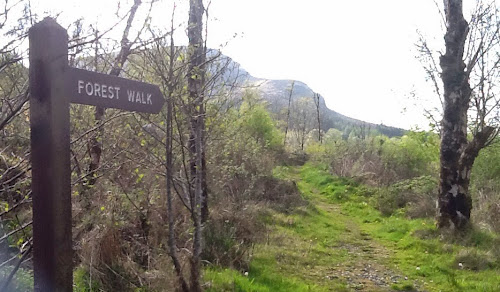 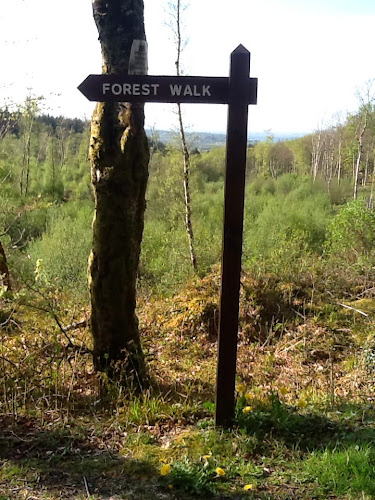 and this is the trail 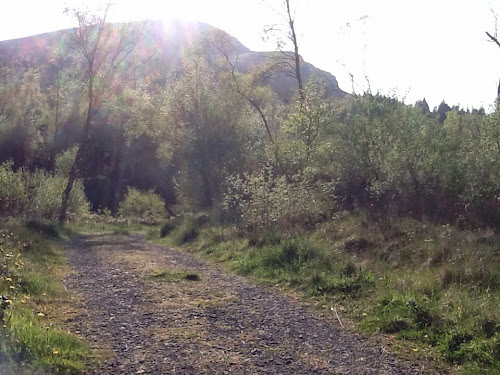 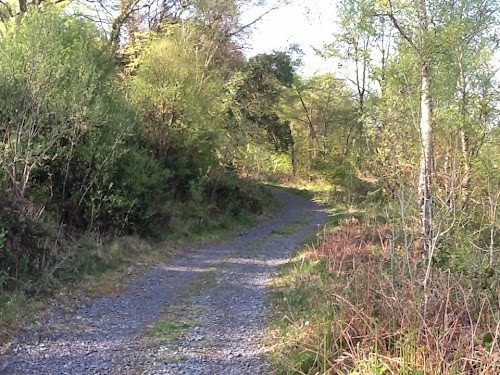 For awhile the native woodland features are good. Ash, Beech, Sycamore, Rowan, Willow, Hazel and Alder are all here, and Holly too. There are good patches of wild flowers here too ... 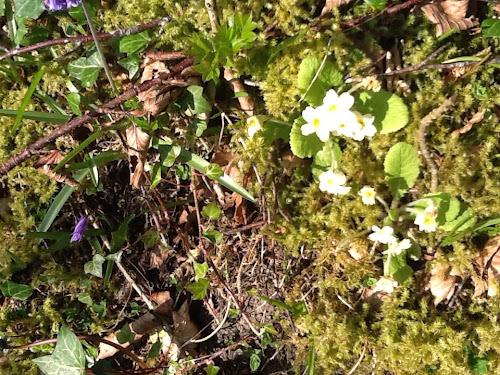 I did not see bluebells here though a guide book says there are here.

After about 1 km, the forest changes to become this. 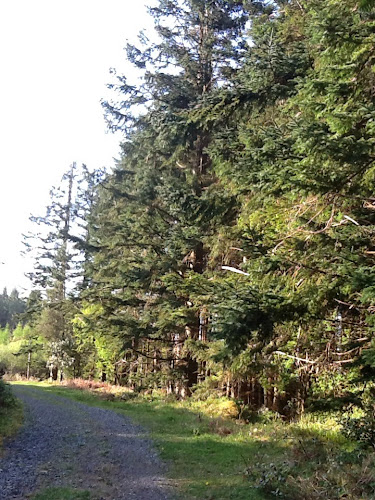 Yes, its a conifer plantation, and it looks like this goes on for many kms.

Well, after another 500 metres its all young christmas tree type plantation. That's Doomore mountain behind, or Dún Mõr, which has a large cairn on the top, and small ones too, but not seen in this pic. I did not climb to see. Apparently if I had continued this path it winds up this rock to the cairns. 3 hours walk there and back, not suitable for this time. 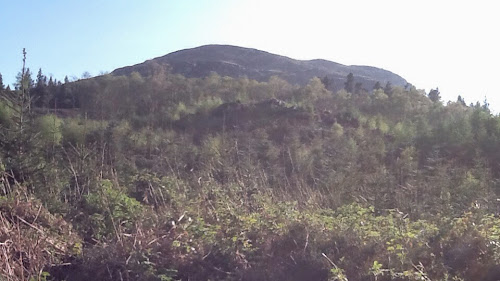 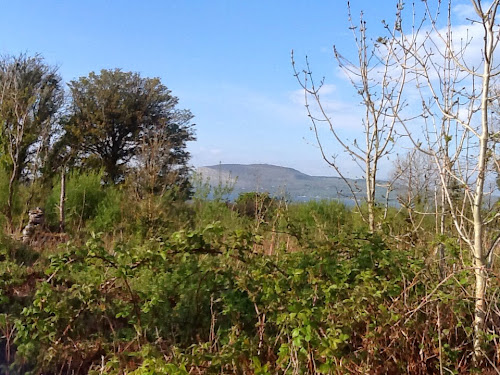 Really, you would not come here to get that view though. Being on the shore would be much better.

I turned back. As I re-entered the Native Woodland area again, in former lands of the O'Hara's there was a trail that intrigued me. 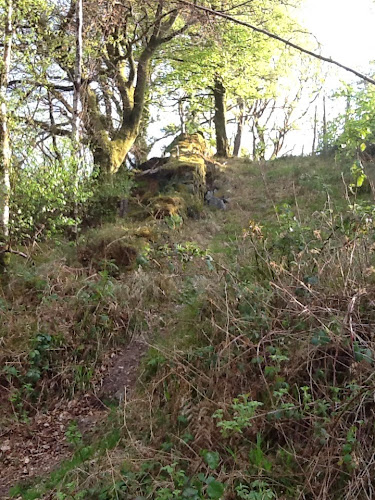 I followed it awhile. 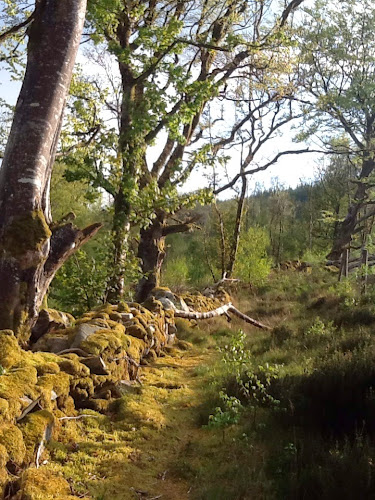 But as fallen trees became more and more to climb over, I became tired and turned back again.

I had decided this was not really a suitable Bards In The Woods forest, but a nice quiet place to stop off and wander if you are passing. However, see how I change my mind about this later. 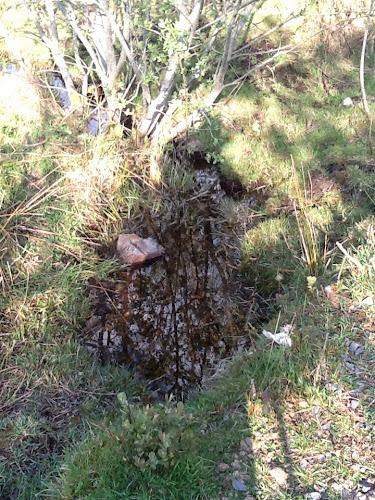 Then this to climb to get into the car park, this pic being about a third of the steps to climb. 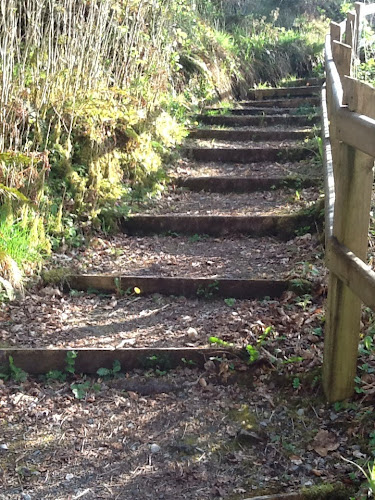 The car park is wrapped around this intriguing stone island. 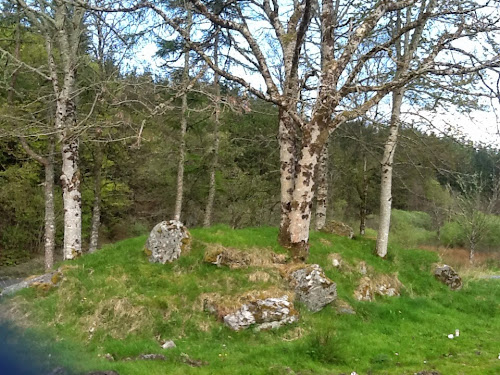 As I was leaving, I saw cars huddled parked by a gate and a path going in another direction. I later learned that this was a path to a volcanic huge standing rock called Hungry Rock that folks apparently like to visit towards sunset. 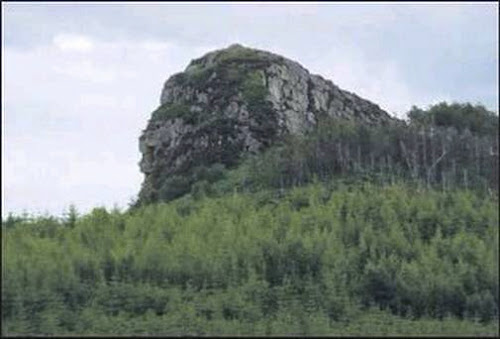 The old legend was that anyone who threw stones at this rock would never experience hunger ... but it was believed to have let the people down during the 1840s famine. Because of those who starved and died nearby it emphasised it being called Hungry Rock. I have also heard that food was also served here during the famine too.

Another place that folks parked here may well be adventuring too, is to Tullaghan Well, near the Hungry Rock, visited by W.B. Yeats who called it the Hawk's Well after a nearby Hawk's Rock, and Hawks Well Theatre in Sligo is named after this well 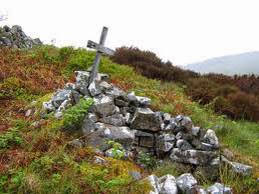 In the Book Of Ballymote the Tallaghan Well is described as one of the wonders of Erin because the ebbs and flows of the well water are said to alternate between fresh water and sea water. Dipping our head in the well at the time of this water change is said to gift us with eternal life. 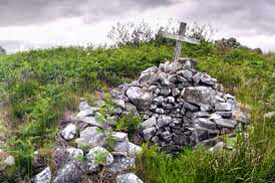 I had also read that this a tricky well to get to. One visitor said the local farmer said nobody visits any more and there is no path to it. It is essential to go here during a dry time too as the route is a little boggy.

As it was late- ish afternoon I avoided this well this time.

Hmmm, maybe a 'special' Bards In The Woods can be offered, being a trek to Hungry Rock, have some picnic there, head off to Hawk's Well, see if we can find a way, a few bardic moments there to celebrate, then back to the car park picnic table to relax and complete picnic among the trees.

What do you think of that idea Woodland Bards?

I left here to get to my fourth and final woodlands this afternoon. It was well after 6 pm as I left though.