We Arose And Went There ... 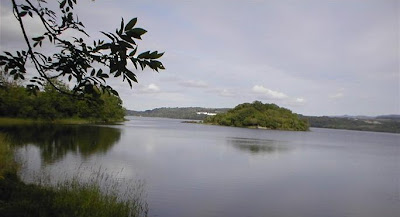 A different kind of Bards In The Woods this Sunday. Last March I somehow anticipated that mid to end of July could be sluggish and the last thing people may want to do is go on a walk, so lets go for a Picnic Spot. I had not been to Trawane Bay on Lough Gill for several years and looked for an excuse to go. It is from here that we can have the closest view to the Lake Isle Of Innisfree, made famous by poet W.B. Yeats. There is an interesting confusion over the spelling of the name, as in most prints of the poem it is Innisfree, on the signposts leading to the island its Innishfree but on the maps published at the time W.B. Yeats wrote the poem it was Inishfree ... but maybe Yeats changed to spelling so we would not think of the Inishfree Island in Co. Donegal. Before heading to Trawane Bay, Bridget Foy suggested visiting a nearby Open Day hosted by The Herbalist's Apothecary around a cottage by the Creavylea Abbey just outside of Dromahair. Handily, this cottage is known a
Post a Comment
Read more
More posts