Our First Visit To Beezie's Island 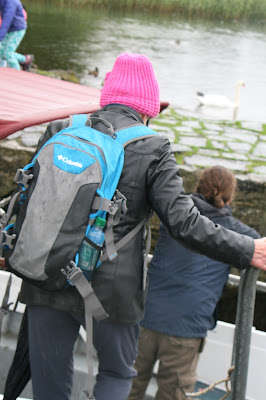 It is Sunday afternoon, 16th August, 2015, and 14 of us are off to Beezie's Island for Bards In The Woods meet up there. So the first 7 start to climb into the boat ... Jan exchanges introductions with Poem Boy and Dangerous Doris (Mike and Anne), before boarding the boat ... First crew ready to sail away ... but not before lifejacket instruction ... And they are away, while those of us left ashore weep in jealousy :-) While boarding, the rain was starting to get heavy. We were a bit dissapointed as all around us was blue sky. Skipper Eddie tried re-assuring everyone that it was a shower passing over and pointed to the abundance of blue sky all around ... Donijka, Talliah and her cousin are contemplating leaving their tree shelter as the rain was indeed stopping and the sun coming out ...  The girls took to seeing the swan and ducks up close ... About 30 minutes later, skipper Eddie had returned with his boat to pick up the re
1 comment
Read more
More posts