We Spring Back Into Hazelwood 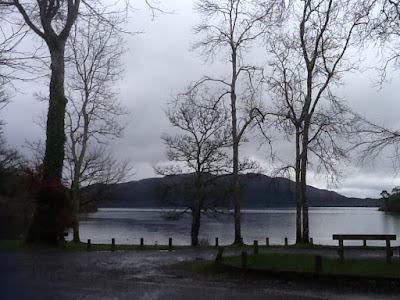 Yay! Our first 'Bards In The Woods' for 2016 on Sunday, 6th March, in Hazelwood, first day of National Tree Week. Some of our regulars had gone off to other events and the weather forecast was not great. Teresa from Boyle asked me for a car share seat, so I knew it would be at least two of us. On arrival, a bit early, some people were waiting for us. This was a lovely surprise as nearly everybody is a few minutes late. While waiting I took some pics from the car park to capture the mood of now. Not as cold as I expected but there was a lingering threat of drizzle and a lot of grey colouring in the landscape ... Some more of the subtle grey colours here .. A child with his father feeding the ducks and other birds. They must have been there awhile as Hubert turned up to join us later and he captured some lovely pics of these two also ... His father is not in that pic though, but notice that dead wood on the shore like some sculpture left behind. Here is h
Post a Comment
Read more
More posts