June 30, 2013
This is a forest I have been eager to visit for a long time. It is known as being here on the banks of Lough Ree in Co. Roscommon for over 7000 years, making it one of the most ancient post ice-age forests in Ireland.

As with many of these Sunday walks, this year, it had been a misty drizzling morning but the afternoon broke into warm summery sunshine. There was a breeze and this kept potential midges away.

I was expecting a network of narrow muddy paths, after looking at an old map, but instantly found that some of these are now replaced, in part, with these wide gravel paths. Signage is sparse and incomplete so we did miss several interesting things here that signs would have helped us locate

There is also so much here, too much to cover in a day. . 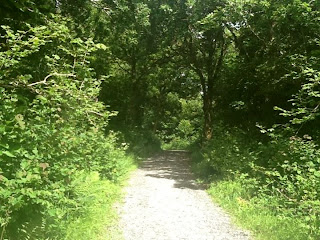 Along the main wide gravelled route there are 10 big signs, tree trunk stumps with big red numbers. I have not been able to find online information to match the numbers or any publication. We guessed what each number may fit too. One thing St. John's Wood is noted for is wild cherry trees, but I discovered I am not great at identifying those. I am surprised I did not take a pic of the numbers either.

Also good to see a lot of coppicing is going on here in these woods, but I did not take any coppice tree pics, which is a bit strange.

There are oaks here, plenty of them but none are very big, which is surprising for such an ancient origin forest. 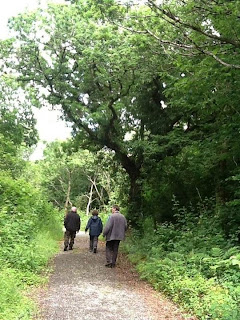 What is known about St. John's is that it has the densest population of hazel trees compared to any other forest in Ireland 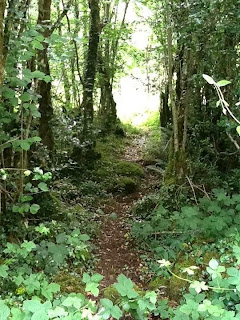 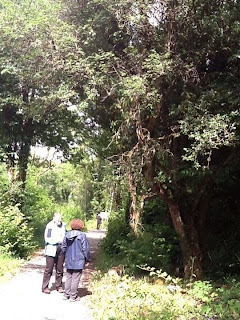 At this point we were looking for a charcoal burner's hut ruins which our guide book said is surrounded by elm trees that had not been affected by the 70s and 80s Dutch elm disease outbreak.

There was one unknown tree we debated and could not truly work it out. We wondered if it was a hornbeam. At home I looked at elm pics and it may have been one ... but due to intense wonder I forgot to take pics.

We did not see the charcoal burner's hut, but we did see this strange neat piling of cut branches making large rectangle formations. 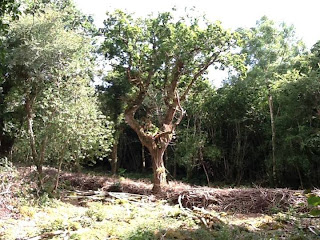 After completing the gravel loop we headed off on the path towards Lough Ree beach. At the start of this it looked like the path had been cut to pour more gravel, and now there were Yew trees, small ones, and a delightful log seat beneath one of the yew trees 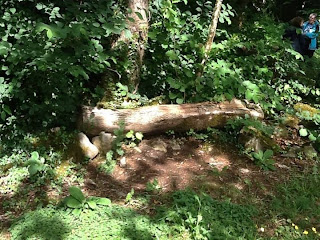 The path became narrower and muddier. One part went over a bridge and on one side of the bridge was a badger set. Three of the group saw a badger run into this ... 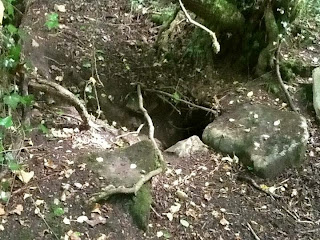 Eventually we could see the path getting closer to the lough shore, but then as the path became narrower it seem to meander away from the shore and eventually there was no path at all.

We doubled back and when close to the shore looked for a shore direction path. Yes there is one, but it needs a marker to show where it is. None of us had ribbons but this bent tree is just before the small path starts.

Here's one of the big crannogs, man made islands, near the shore, along with some scene of Lough Ree and some shore line reeds. 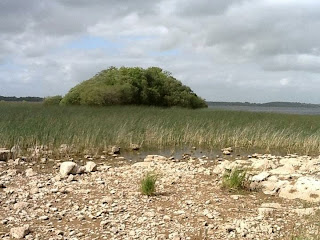 Here there was a lot of volcanic rock, we called moonrock, and it was home to many fossils. 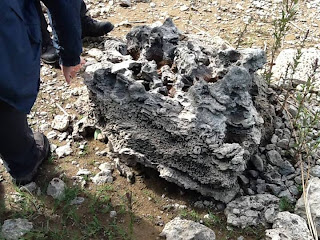 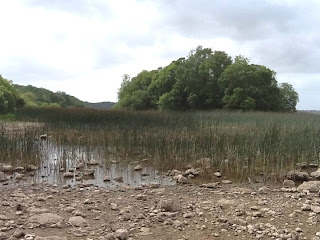 Back at the forest edge, after over 4 km walking we decided to picnic in shelter with seats, and away from possible midges and wind 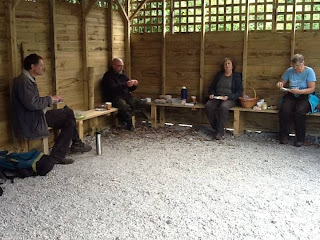 Bridget had talked about her desire to visit nearby Mote Park Forest sometime so Jonathan Pipe and I visited there for a look around on our way home.

I was largely disappointed with Mote as it seemed to be mainly long straight gravel walks with mainly monoculture sitka spruce plantations beside them.

One delight was getting some pics of a large ancient oak at Mote that has obviously been struck by lightning. A good graphic for my Brighid storytelling for when I explain where the Brighid name comes from and its relationship with Oak. 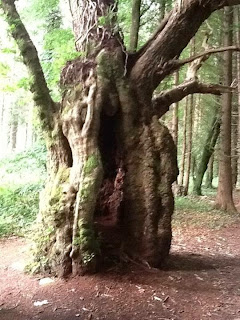 I look forward to coming back here as soon as I can, maybe not until next year, to have another look for the charcoal burner's cottage ruins, confirm the elm's presence  ... and then some time on the land of the Rindown medieval city ruins that includes ruins of a castle, a couple of churches and a tower, but also has more native woodlands on a peninsula jutting out into the widest section of the Lough Ree.

Do come along with us when we return to here, or go there before with your friends and share your experiences there.
.