A Walk Through Devil's Glen 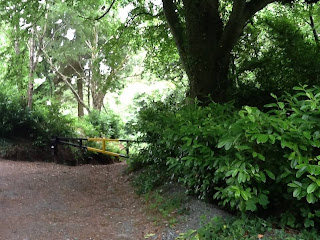 Interesting that when I first posted pics of this walk online, there was a reaction from some USA folks about the name of this place. I think the Devil is a more potent name over there compared to here.

Apparently, Devils' Glen here describes a sound from the past. The usual quest for walkers here is to walk to the waterfall and back along a circular route that takes about two hours of hiking, about 7 km I believe.

The waterfall today is a gentle trickle compared to how it was in the past. A dam now holds the water from travelling down the River Vartry. Before the dam the river roared over the rocks, a sound that echoed through the valley - hence the name Devil's Glen.

I did not get a very good head count for today. There must have been 20 people, and it seems like this included 8 children, 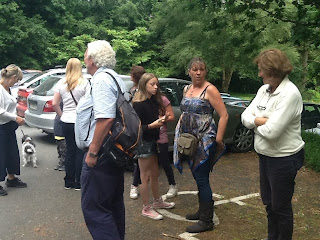 and there was one dog. 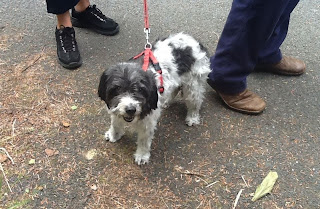 Very few men on this walk, just me and one other.

This was a lovely Sunday afternoon too, mainly sunny, warm, and the day before the upper 20s C, 80s F heatwave arrived.

I had not been here to Devil's Glen before and suggested my usual Sunday afternoon meet up time of 3 pm.

Alas, I did not know that there was a forest road and car park lock up time of 5 pm !!! On arrival some of the people wanted to picnic first, but then I stressed the sign showing our limitation.

We did kick off with young Bethan performing some tunes on her harp... 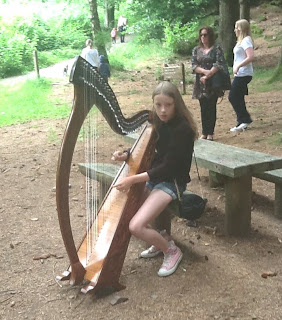 ... and then off on the hike we went. Some of the party decided to stay behind at the picnic table.

There were two speeds of hiking that went on right away. The 'power walkers' followed the signs and took the top path first, while I and others were eager to get by the River Vartry and walk along. We somehow thought the top road would be shorter for the return and be less hill climbing on the way back. 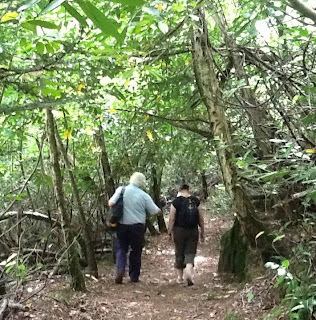 The forest beside the river was beautiful ... 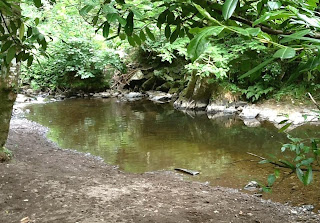 Sitka spruce and firs do have the majority population but Coillte do state that 13% of the forest is broadleaved and they intend to improve that statistic over the years. Some trees I could not identify, they seemed to be imports, but oaks and elms were present. 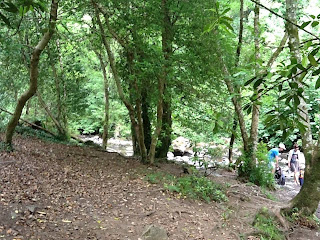 Around this trail are several wood sculptures, most of them carved from sitka spruce trees, firs and larch. For some reason I did not take photos of them. I just did not find them interesting. I'm all for art being expressed in a woodland rather than an indoor gallery, but this work, well what I saw, just need not match the natural creations around us.

As we tramped on we wondered how the high road track being were doing, but no way of messaging them.

Looking at the time, realizing we were cutting it fine to return to the car park by 5 pm, and so we consulted a couple of women coming towards us for their opinion. One delighted to tell us we had another 10 to 15 minutes walk to reach the waterfall. Then the other woman broke into horror stories of how vital it was to return to the cars by 5 pm. She spoke of the several people locked in and the fines they had to pay.

On that word, we turned back, our waterfall quest mission cancelled. Our thought was that if we could get to the gate of the forest road by 5 pm a kind forester would resit locking the gate until we were all out. Some were already on their way back with this in mind because one person had phoned a forester to find out if the 5 pm curfew was true ... and was told it was.

At 5 pm we were back at the main car park, plus a couple of 'sentry's' at the gate to be locked. By about 5:30 pm, the high path people arrived back, having walked the full circuit and even had about 20 mins rest admiring the waterfall. 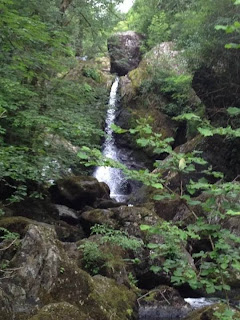 Above is a lovely pic from  Tara Ní Crábhagáin, I think her daughter Bethan must have taken this ...

We set forth in semi panic 'to the gate to be locked at 5 pm' leaving several cars in the car park, wondering if they were to be locked in too?

At the gate was more of the forest, shaped in a kind of amphitheatre golden with beech and hazel tree leaves fallen during the autumn before and lots of logs to sit on and use as picnic tables.Safe from the looming gate lock up we let the picnic unfold. 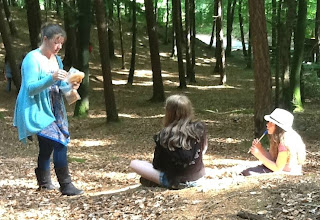 Stories were told, people read and whistles played as tea poured and salad delights were shared. What a beautiful picnic spot :-) 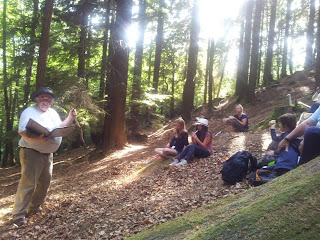 Thank you Tara Ní Crábhagáin for that pic above too,
and I like this black and white pic Tara took too ... 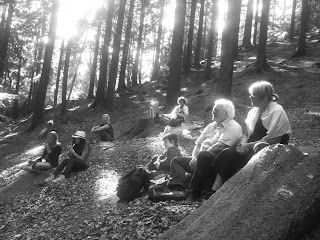 One theory is that as it was Wimbledon finals day, the forester was more eager to see the end of that rather than lock us in.
forest bathing forest walks Irish harps poetry reading waterfalls Wicklow woodland walks