The Forests Of Cong

August 27, 2013
Last weekend I was invited to a birthday party that included the treat of an overnight stay at Ashford Castle that just about every visitor to Ireland from the USA dreams of staying in. Finding a time at the right price is the challenge as usually the regular overnight price is beyond the budget that anyone wishes to pay. 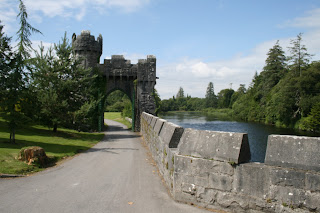 This post is not revel over Ashford Castle, though, but its network of incredible mainly native tree forests that expand out for several Kms and miles. During both the Saturday and Sunday in the area we went on walks. 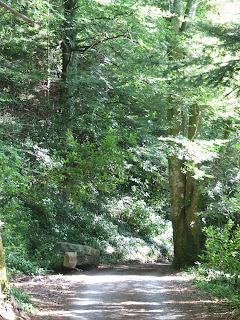 This beautiful forest land stretches between the grand loughs of Corrib and Mask, which means its straddles over the borders of counties Galway and Mayo. It also links the villages of Cong and Clonbur 6 km apart. 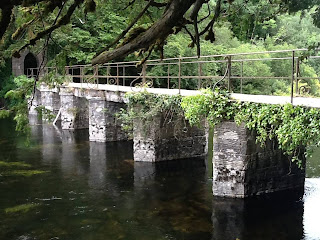 Cong is quite a tourist village, mainly due to its reputation as being location of the Quiet Man movie 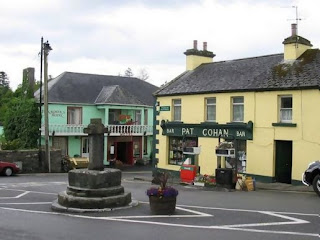 much more than its multi plundered Abbey and Monastery, the surrounding ancient stone circles and cairns 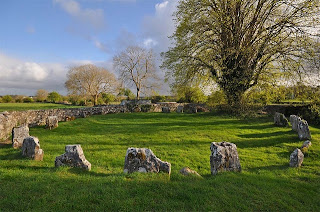 or indeed its forests and wonders of caves and water springs and native trees. 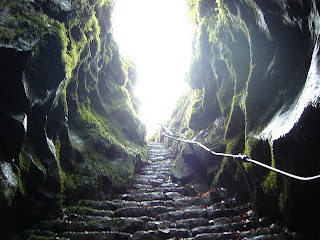 Since my last visit, Cong has gone through a lot of beautifying, old run down shops and an awful fast food take out shop have all become cozy cafes and some of the struggling pubs are now galleries and art centres. I was sad to see one excellent fresh seafood serving pub with B&B Inn now closed to be an art gallery.

I did not take photos of Cong village, though, as I really want to talk about its forests. 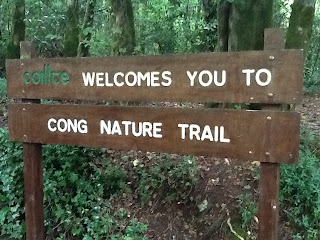 Ashford Castle is within the forest complex but various hotel owners have restricted access, sometimes illegally as there are ancient rights of ways here, but Ashford has been concerned about protecting privacy of it's celebrity, political and world leader guests.

Since Ashford Castle was possessed by the Ireland Revenue it became a free for all for access again, perhaps in defiance of the last owner, a fairly local one too, who was ruthless about limiting and stopping public access. Ashford Castle has since been bought by a South African hotel company rather than investment group so many are curious to see what changes this brings. 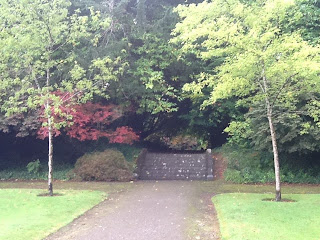 Today there are many people taking advantage on mountain bikes, walking dogs and walking their children in strollers. 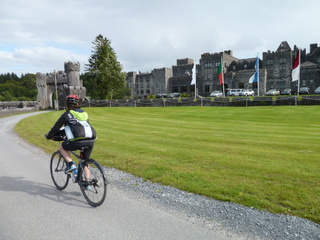 One person leaving Ashford Castle by helicopter on Sunday morning, who looked like actor Denis Lawson perhaps best known in the current New Tricks series, Wedge Antilles in Star Wars and John Jarndyce i Bleak House, ... attracted a large audience of people on bikes, with dogs and with strollers.

One the Saturday we took a mere walk around the forestry on the grounds, but it was on the Sunday we participated in extensive walks. 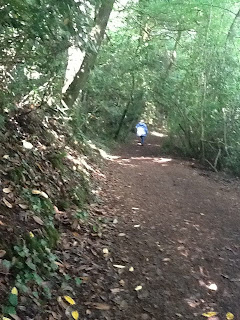 First, we took the River Walk along the River Cong 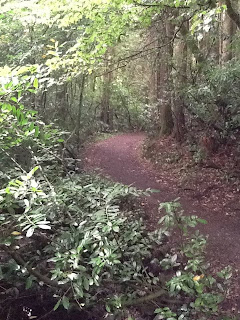 Then over to the Monk's Fishing House 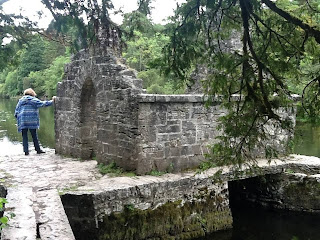 And here's something about that ... 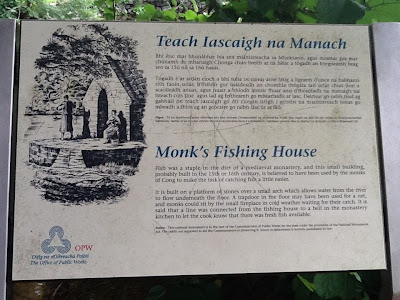 This notice mentions about fish being the staple food of the monks. Well we saw a lot of salmon in the river's very clear water, as many as 4 or 6 of them together plus many jumping.

Here is the Fishing House as seen from the River Cong ... 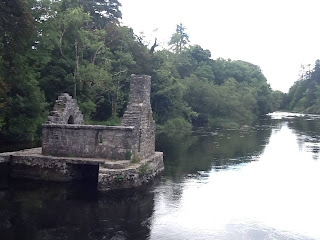 Then we had a stroll around the village and met up with some of our party friends saying their farewells.

While there we forgot to visit the Duck Crossing right beside where we were meeting up. 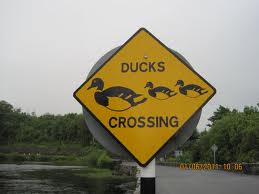 This is a place of many ducks there on the river. 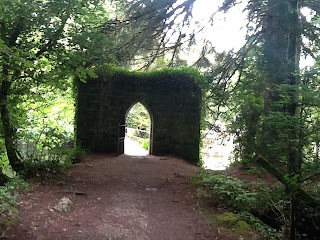 In the afternoon we went off on the Corrib shoreline walk 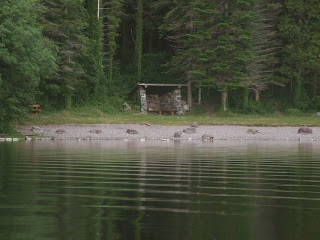 There is a lovely beach along this walk, about 2 km from the castle. 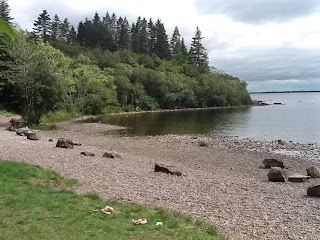 Here are some spectacular views over Lough Corrib 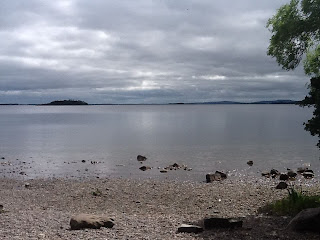 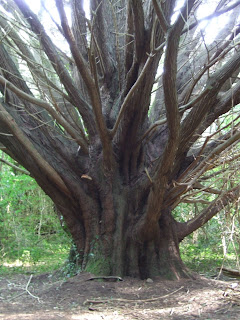 We returned to the castle but as it was still a lovely day we pondered over taking the boat to Inchaghoill Island, which is a fascinating place 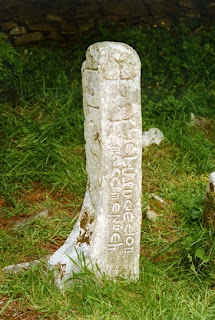 But that forest island is a day adventure, maybe a special Bards In The Woods there next summer :-)

Instead, we went on a drive.

I have wanted to take some pics of the St. Fechin cairn well to the south west of Lough Mask in the Lecarrow Valley. I had lost my previous set of pics and ancient cairn wells in Ireland are scarce.

Alas, the stile and right of way path to the well have now gone, and the roadside parking area, and a thick hawthorn hedge now grows in front of the fence where the stile was.

Pity, as this is a 'must see' well, and access used to be very welcoming. Maybe there is another public way there now. I will return one day to find out. Meanwhile, here is distant pic of the well to show the little cairn material around it ... 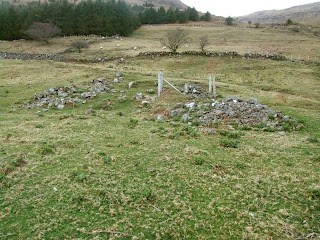 And here is a close up of the well. Note the round turning stone. There used to be two of those, but one has been stolen. There are other mysterious stones in the collection. Maybe some of those went too, hence the possible restriction on access now. 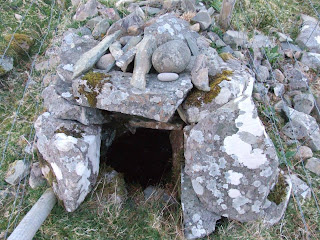 To complete the day we thought we would investigate the trackways of the Clonbur and Lough Mask end of the Cong Forest, the white dotted trail. 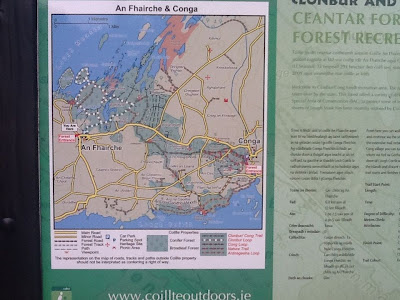 But, after reading that it was at least 7 km walk, we thought we would leave this for another day. Also it was soon to be time for us to be meeting others for a bar food evening meal before returning home to Carrowcrory.

Overall Cong is truly a one stop place to spend a complete vacation as there is so much here in activities and beauty. The forest paths here lead to many of them and they, alone, need a week of exploring really.

Here is a Google Map of the highlights around Cong Forest