Hunt For The Kilronan Big Tree

October 13, 2013
Something a bit different this Sunday. At Kilronan we often head through the forest to the Court Cairn and the viewpoints of Lough Meelagh, but I wanted to return to the other end of the Lough as there is much I would still like to explore there. Its all grand native trees around much of this beautiful Lough, one of the most beautiful spots of Co. Roscommon, a very underated beautiful county.

Pessimistically, I did not expect anyone to arrive. As I drove the 30 mins drive to get here I must have passed and dodged up to 100 people walking the busy roads accompanying young children wobbling on bicycles, pushing wide strollers and with dogs winding leashes around their legs and ankles.

I wondered why these people prefered the danger, noise and stress of the tarmac on this beautiful sunny warm for October day, instead of the quiet and peace of a woodland.

Here I waited, nobody here, not even for themselves.

I wandered towards the water and found an overgrown footbridge, pushed through it, and a path arrived at this harbour

Carrying on this path I became excited about finding something new, and a view of the legendary Orchard Island came into view over the reeds.

Rosehips still on the rose vines here too.

The path then pulled away from the water and turned into being a loop back to the 'fairy house' but then a couple had arrived who were waiting for me.

So we set off

I could not resist another pic of this faded sculpture beside this folly cottage, which to me I am convinced is a goblin on the back of some creature, that is on the back of a fish like figure ... but the couple with me could not see it and I think already thought I was odd.

Oops, look like some of the 'fairy house' is crumbling away

Looking back to the entrance to see if anyone else is about to join us?

Off sliding through the old entrance,

No, we did not go through or cause the bent gap in the gate, we did go through the gap by the black and red post.

And then it was off along the magic path

But the couple with me did not see any magic in this, quickly turned back onto the tarmac road to Kilronan Castle and said they were off to there for coffee and would walk later.

So that was that, I continued to walk alone.

Looking over to spot the little crannog

And the path became a bit wider

Yes, I am going the right way

Went down lower to explore a boat house

With its old gates stretching into the lough

Back on track, and this fallen Oak. Yes, I can get past this.

Admiring the volcanic erratics stones just past this fallen oak

And then my phone rings.

Its Bridget Foy wondering where I am. I said I would walk back to her, but surprise surprise I met the couple who said they were off for a coffee.

After a wee chat, they headed back out the forest and off over the grass towards the castle turret ... on the double !!!

Had I forgot to put deodorant on?

Bridget phoned again. I had a feeling she was just above me on an upper path. I went up higher ... and there she was. :-)

Back down to the lower Lough side path we continued.

Yes, we are still going the right way. The Oak say so.

Lovely Coppiced Oak just past this

Moments later two men in suits, tie, Sunday shoes and a poodle appeared. Why I did not get pics, I do not know. I was just too amused.

Brighid said that they were two RTE presenters ... no camera people about.

Then we came to my own main mission of today, to this place ... 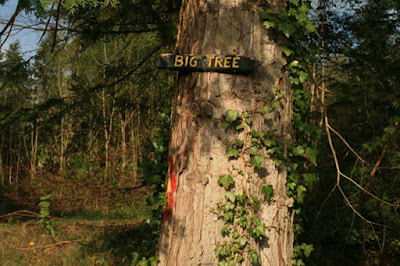 Actually, not this tree, and that sign is no longer there
... but this tree

Looking up both Bridget and I got reverse vertigo as the first branch of leaves were way, way above us, and not even on these branches

With heads in dizziness looking up we concluded this was a massive very ancient Yew, but we were wrong.

This is a Sequoiadendron giganteum Redwood which are actually quite rare away from their native California home, and once Chile home too but made extinct by loggers there. Most of these trees are only found in the Sierra Nevada in California and for some reason very few have lived when planted elsewhere,

These are the trees John Muir fought to preserve from loggers that eventually founded the Sierra Club which later spawned Friends Of The Earth, Greenpeace and the Green Party.

In California these trees are 3000 to 4000 years old, This 'Big Tree', which is genuinely another name for them I have learned, must be several hundred years old. So this is a very very special place to visit.

I find it a bit confusing as the Sequoia sempervirens, the Coastal Redwoods, are quite common around Ireland and there are some of those around Lough Meelagh too , but on the opposite side of the lough to where we were.

So yes it is a 'Big Tree', and when a human is near it, like Bridget here, you can see it is.

After pondering that, sky was now very blue and sun was out we decided to continue to Doon Point, otherwise known as 'The Edge Of The World'

I wanted to get a decent pic of the legendary Orchard Island and the little Crannog Island in One ... and I did :-) ... check these out

Orchard Island is the tree island left of the little Crannog

And then we headed back

Tempted to cross this stile into the Fae Realm

But we had some cups of tea and picnic instead, for awhile
And then the sun was about to set

Nice crafted sensitive job going on here making the well cleaner and more functional.
Even the old moneybox has been crafted into the new wall :-)

And the setting sun shone through to the well

I am actually pleased to see that awful white pillar come down. It is badly damaged so I doubt if that will stay.

The sun has now truly set

PS ... since I wrote this we have visited Lassiar's Well a few times, and the additional work done since has been quite disturbing. It has now lost most of its evidence of traditions.

I will add links here later when I can ...